A 48 year-old male with a history of congestive heart failure s/p left ventricular assist device is brought in by EMS with low-flow alarms. According to prehospital report, the patient had otherwise been in his usual state of health and had been shocked by his ICD multiple times prior to their arrival. No vital signs could be obtained en route.

On arrival in the emergency department, the patient was awake and responding appropriately to questions. His MAP was 80mmHg, an audible whir was auscultated from his device and the skin surrounding the percutaneous exit site appeared normal. 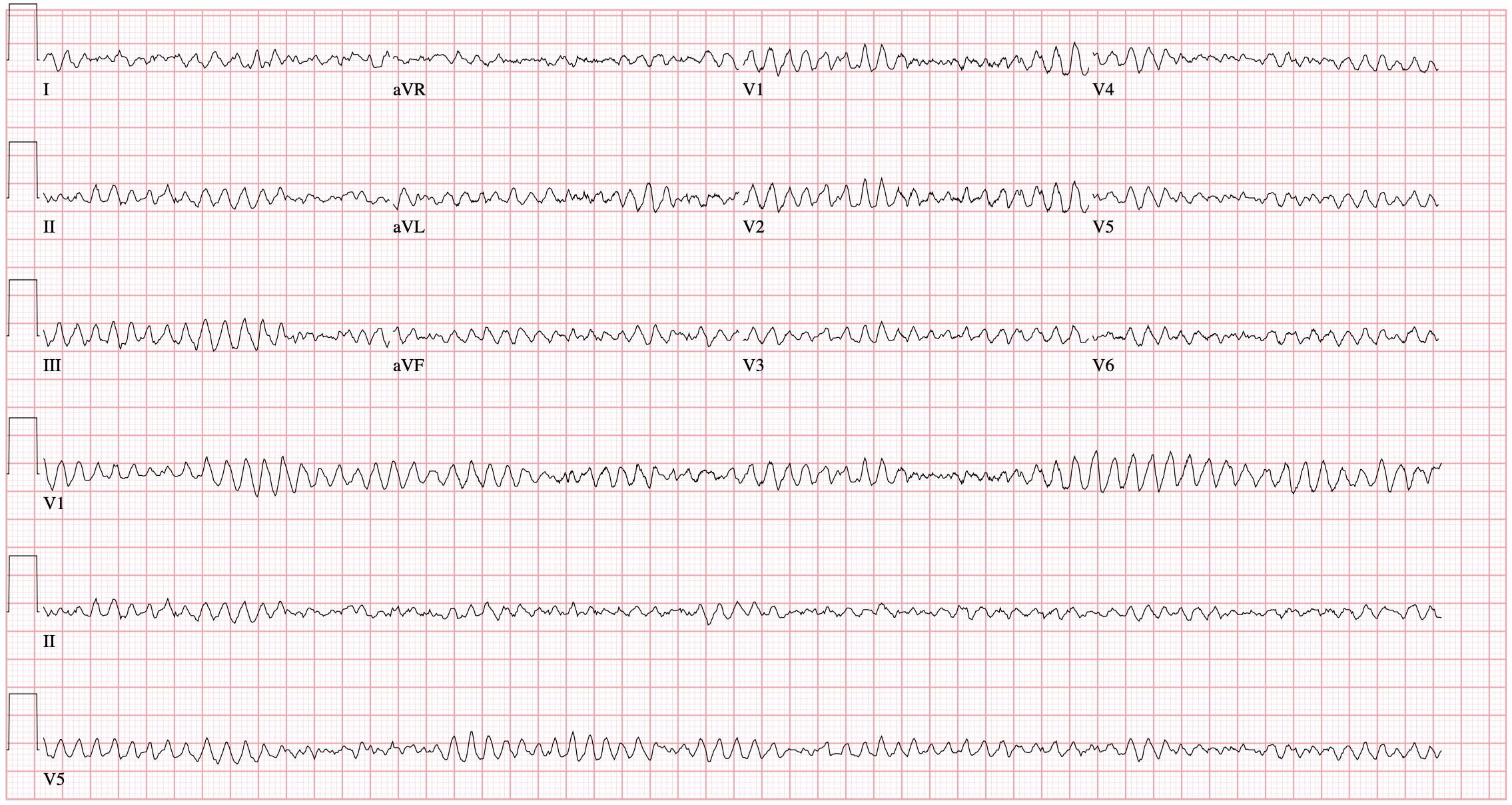 The patient’s device was inactivated with a magnet to prevent further ineffectual shocks. An arterial line was placed for continuous blood pressure measurement. He was sedated and externally defibrillated with return to normal sinus rhythm prior to admission to the CCU.

An Algorithm for the Evaluation of Unstable LVAD1

A 34-year-old male with a history of rheumatoid arthritis and interstitial lung disease presents to the emergency department with joint pain unimproved with home medications. He suspects the precipitant is a recent illness, describing cough and nasal congestion. He also noted a “crunching” sensation when turning his neck not otherwise associated with fevers, recurrent vomiting, chest pain, abdominal pain or difficulty breathing.

A chest radiograph was obtained which demonstrated pneumomediastinum. 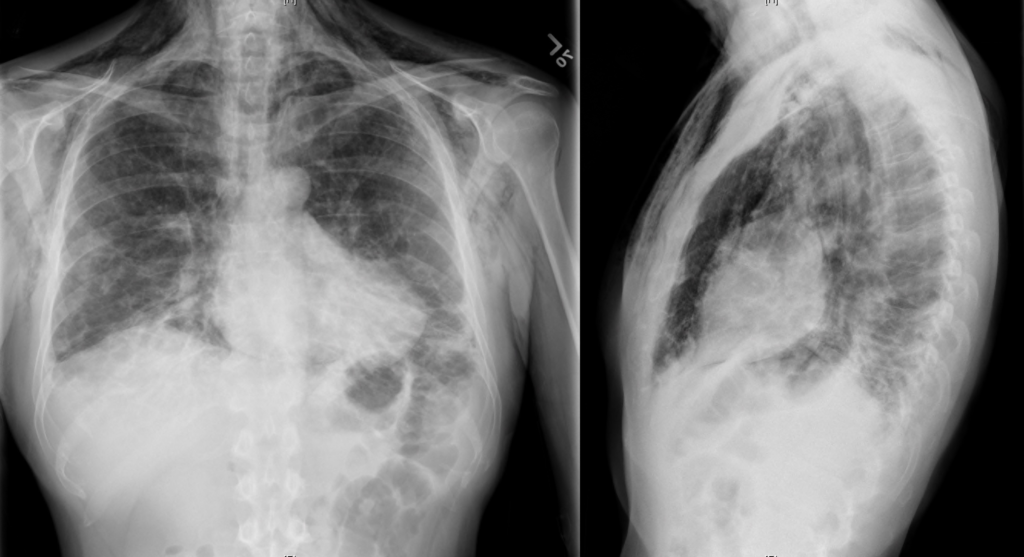 Imaging from several months prior to presentation is shown below:

Extensive peripheral reticular and ground glass opacities and traction bronchiectasis predominates in the lower lobes. Imaging findings are most suggestive of usual interstitial pneumonia. Small focus of pneumomediastinum at carina.

The patient was placed on supplemental oxygen, a repeat chest CT was obtained.

The etiology of the patient’s spontaneous pneumomediastinum was deemed to be related to his underlying interstitial lung disease provoked by viral respiratory tract infection related coughing. He was observed for two days without decompensation and was discharged with outpatient follow-up.

Spontaneous pneumomediastinum results from the rupture of terminal alveoli with subsequent tracking of gas along the bronchovascular tree through interstitial lung tissue to the mediastinum and adjacent structures (pleural, pericardial, retropharyngeal, retroperitoneal, intraperitoneal and subcutaneous spaces)1.

Secondary pneumomediastinum arises from non-alveolar sources including the gastrointestinal tract (most gravely, esophageal rupture though also from other intraperitoneal sources2), and upper respiratory tract (including facial fractures3).

The management of spontaneous pneumomediastinum focuses on treatment of the underlying precipitant, supportive care, administration of supplemental oxygen (to promote gas reabsorption) and observation for complications including rare progression to tension pneumomediastinum4.

Secondary pneumomediastinum is of significantly more concern and should be suspected in patients with any of the following features:

A 35-year-old female with no past medical history is brought in by ambulance to the emergency department. She was struck by a firework (“Roman Candle”) which lodged in her mid-chest until the propellant was consumed. She transiently lost consciousness but was awake upon EMS arrival. She complains of pleuritic chest pain. Examination reveals a circular 4x4cm full-thickness burn to the mid-chest with surrounding deep and superficial partial-thickness burns. Her ECG shows normal sinus rhythm, the initial serum troponin I is 32.9 (normal <0.012). CT angiography of the thorax is obtained. 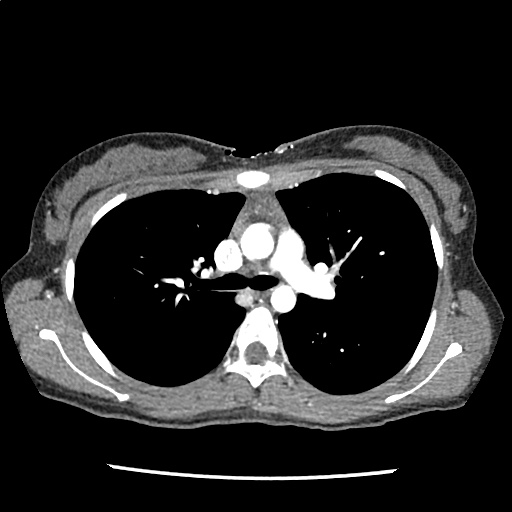 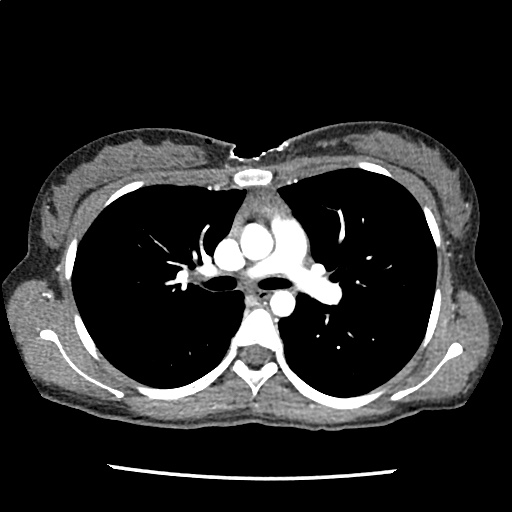 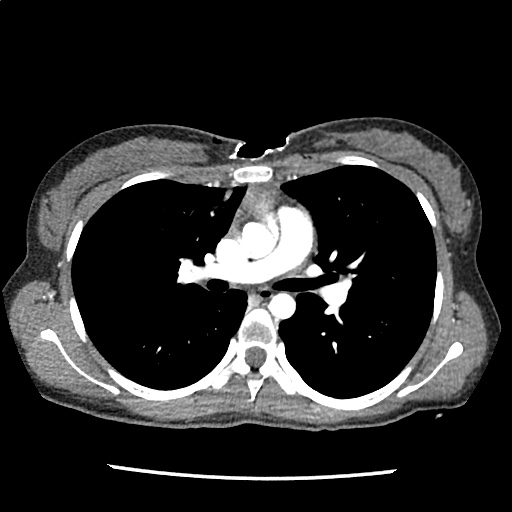 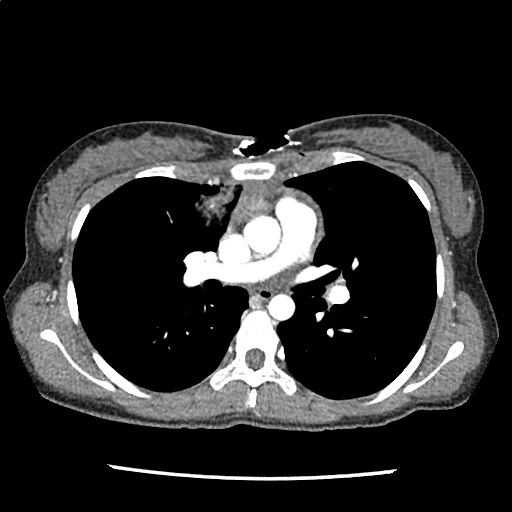 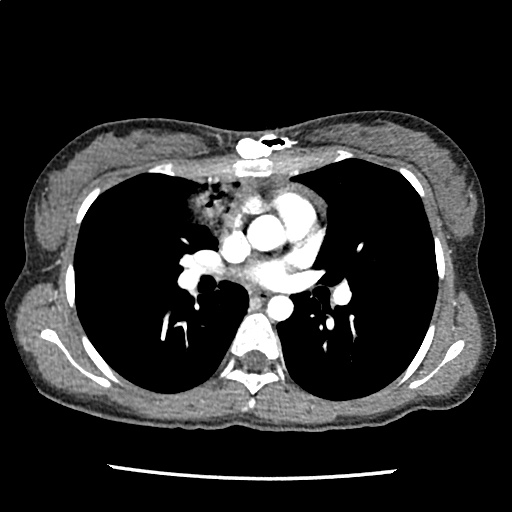 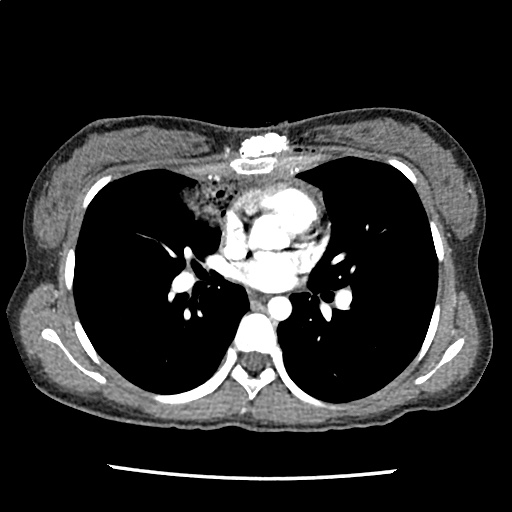 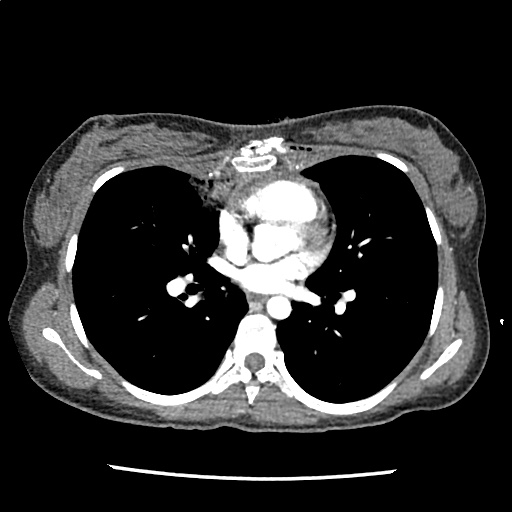 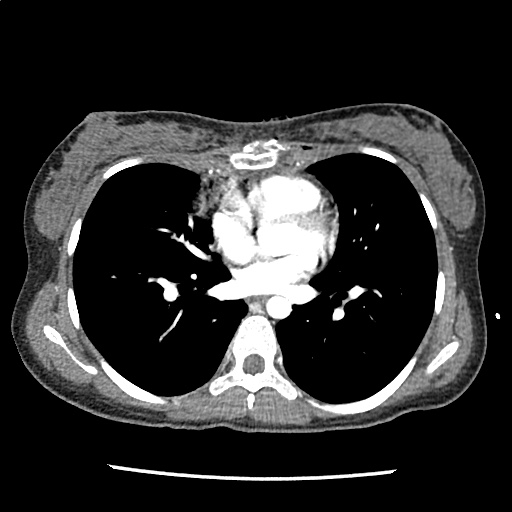 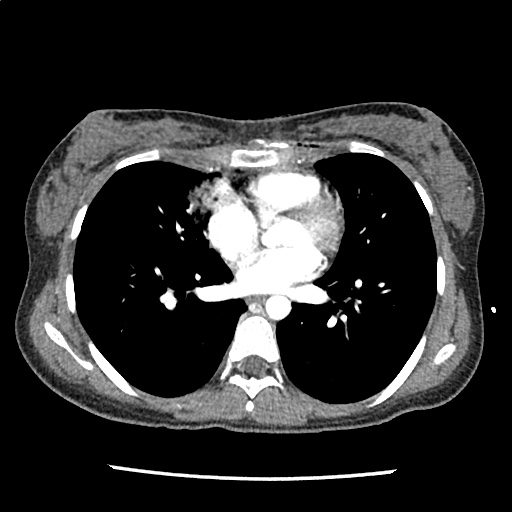 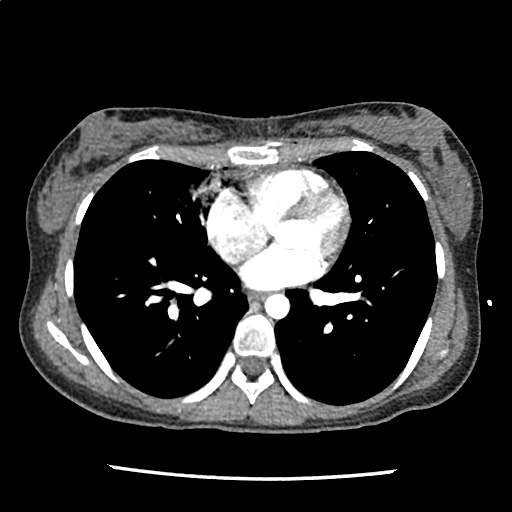 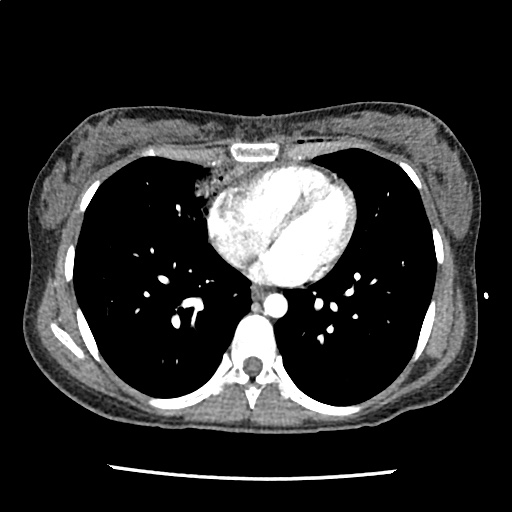 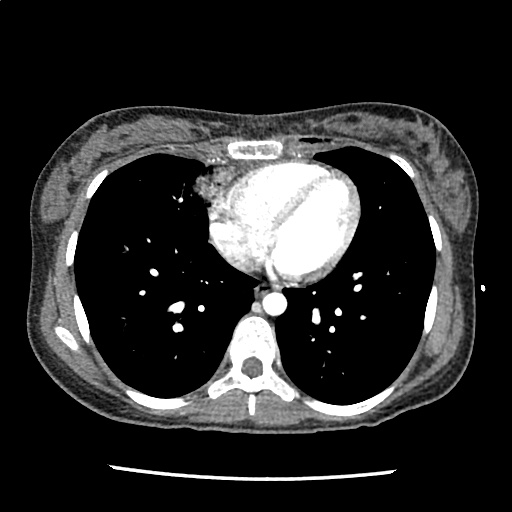 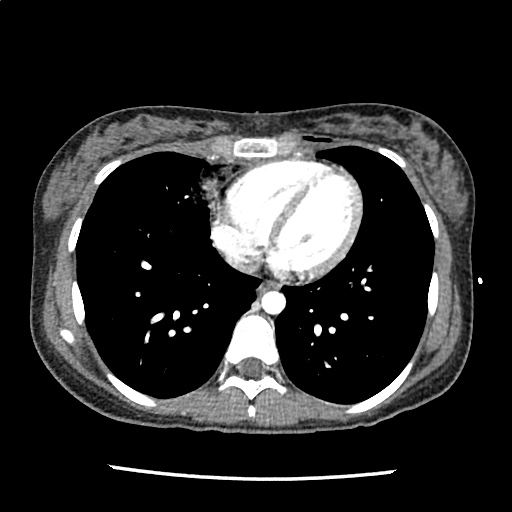 BCI represents a spectrum of conditions. Diagnosis is both challenging and critical as clinical manifestations can be absent or rapidly fatal.

At one end of the spectrum is myocardial contusion. The lack of a gold-standard for the diagnosis of this clinical entity has led to a preference for describing associated abnormalities if present3,4, including cardiac dysfunction (identified on echocardiography) or the next entity along the spectrum – arrhythmia.

The most common arrhythmia identified in blunt cardiac injury is sinus tachycardia, followed by premature atrial or ventricular contractions, T-wave changes, and atrial fibrillation or flutter5. Commotio cordis is a unique arrhythmia induced by untimely precordial impact (often in sports) during a vulnerable phase of ventricular excitability, resulting in ventricular fibrillation2.

The remaining disease entities are increasingly rare, require careful examination or imaging for diagnosis, and are more likely to be non-survivable. Septal injury can range from small tears to rupture. Valvular injury most commonly affects the aortic valve (followed by mitral and tricuspid valves) and involves damage to leaflets, or rupture of papillary muscles or chordae tendineae. The clinical presentation is of acute valvular insufficiency, including acute heart failure and murmur2,7,8. A widened pulse pressure may be noted with aortic valve injury, and the manifestations of valvular injury may be delayed9. Finally, myocardial wall rupture is unlikely to be survivable, though patients may present with cardiac tamponade if rupture is small or contained2.

The primary diagnostic modalities for the assessment of BCI in the emergency department include assessment for pericardial fluid during the Focused Assessment with Sonography for Trauma (FAST), electrocardiography and cardiac enzymes.

While specific for identifying patients at risk of complications of BCI, electrocardiography alone is not sufficient to exclude BCI. In one study, only 59% of patient with echocardiographic evidence of BCI (wall-motion abnormalities, other chamber abnormalities) had initially abnormal ECG’s10. In another study, 41% of patients with initially normal ECG’s developed clinically significant abnormalities11. The use of specialized electrocardiography including right-sided ECG (proposed to better detect right-ventricular abnormalities which are more commonly associated with BCI) and signal-averaged ECG is not supported11,12.

Several studies have supported the use of serum troponin for the detection of clinically significant BCI – particularly in combination with electrocardiography. A prospective study in 2001 evaluating patients with blunt thoracic trauma using ECG at admission and 8-hours, as well as troponin I at admission, 4- and 8-hours had a negative predictive value of 100% for significant BCI (arrhythmia requiring treatment, shock, or structural cardiac abnormalities) in patients with initially normal ECG and troponin13.

Another prospective study adding to the population evaluated by Salim et al. included 41 patients with normal ECG’s and troponin levels at admission and 8-hours who were admitted for significant mechanisms, none developed significant BCI (again described as arrhythmia requiring treatment, shock, or structural cardiac abnormalities) after 1 to 3 days of observation14. The precise timing of serum troponin analysis remains unclear.

While FAST may detect hemopericardium warranting immediate intervention, formal echocardiography is indicated for patients with unexplained hypotension (to evaluate for valvular injury or regional wall-motion abnormalities) or persistent arrhythmias (to evaluate for arrhythmogenic intramural hematomas)15. The presence of sternal fractures was previously thought to increase risk of BCI and mandate echocardiography, however this notion is no longer supported16-18. The role of advanced imaging including helical CT (cardiac-gated), and MRI remains unclear19.

Algorithm for the Evaluation of Blunt Thoracic Trauma

Management of BCI depends on the pathologic process localized along the spectrum defined above. Persistent hypotension after appropriate evaluation for alternative etiologies may represent myocardial contusion with cardiac dysfunction and should be evaluated with echocardiography. Similarly, echocardiography and observation with continuous telemetry monitoring is indicated for any new arrhythmia or persistent and unexplained tachycardia. Patients with only elevation of the serum troponin without electrocardiographic abnormalities or obvious cardiac dysfunction should also be admitted for observation and serial cardiac enzymes. Traumatic myocardial infarction, valvular injury, or post-traumatic structural myocardial defects should be managed in consultation with cardiothoracic surgery5,19-21.

The CT interpretation noted the soft-tissue defect identified on examination as well as associated pulmonary contusions and a non-displaced sternal fracture. The patient went to the operating room for washout and debridement. A transthoracic echocardiogram demonstrated trace mitral regurgitation and a small pericardial effusion. She remained hemodynamically stable and serial troponin measures downtrended – no dysrhythmias were noted on telemetry monitoring. She was discharged on hospital day four with a negative-pressure wound dressing. 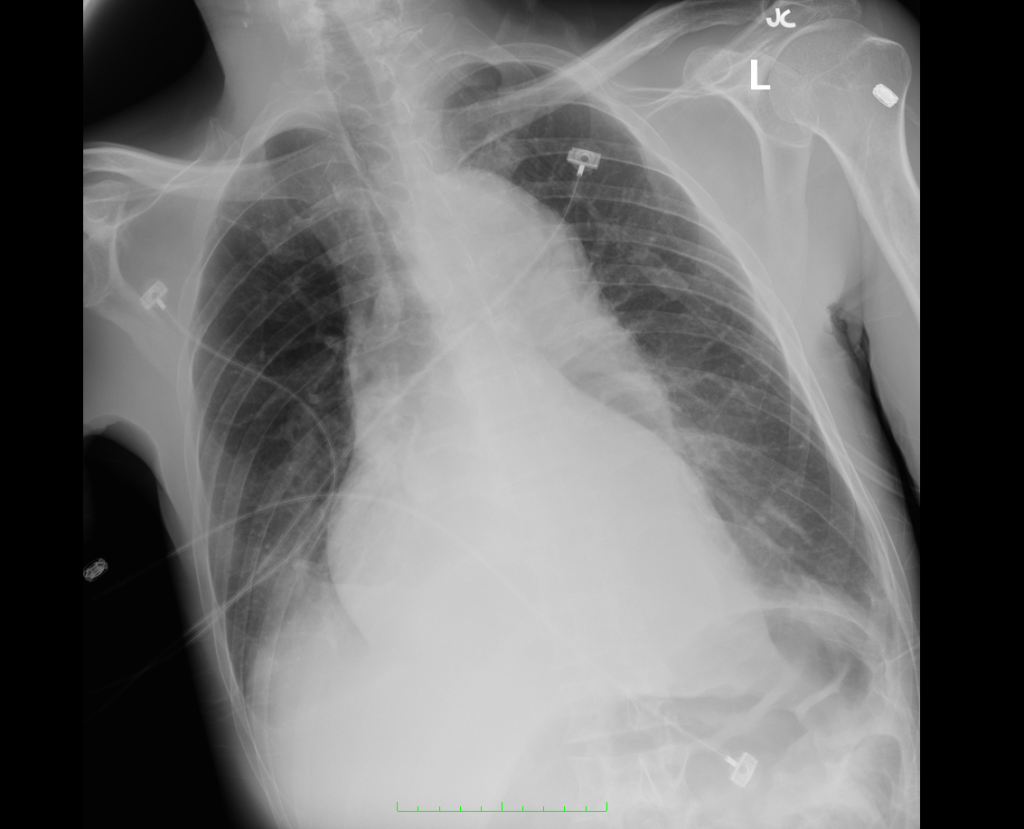 Prominent cardiomediastinal silhouette, which may be due to patient position.