posted in Pulmonology on June 3, 2013 by Editor 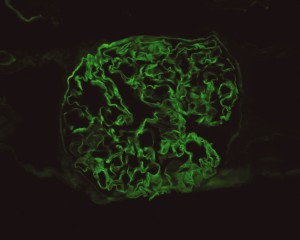 61yo African American female w/hx of HTN presenting with 1mo of persistent cough productive of green-yellow sputum, noticed streaks of blood for the past 5 days. She came to the ED today because she has been feeling increasingly fatigued. She reports subjective fevers at the onset of symptoms which has resolved. She denies shortness of breath, chest pain, chills, night sweats. She sought medical care for this problem 2wk ago and was treated with amoxicillin and a cough suppressant. She recalls a coworker was ill one month ago. She is US-born, had a negative PPD in the past and has no known exposures to tuberculosis.

Of note, the patient reports her urine had a foamy appearance and has been darker in color beginning 3 weeks ago, but this had resolved. She denied dysuria, or frank hematuria. 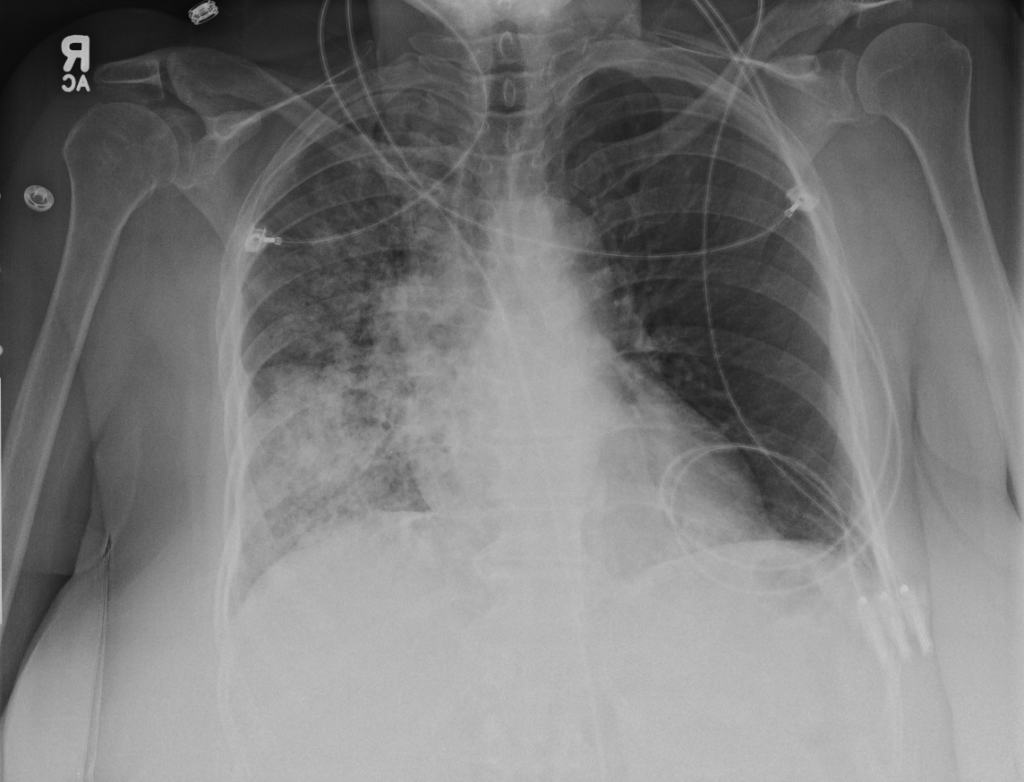 The patient was admitted for management of community-acquired pneumonia and isolation to rule out TB. Empiric therapy with CTX + azithromycin was continued. On HOD1, the patient was transfused two units of PRBC’s. On HOD2, the patient underwent CT chest/abdomen/pelvis due to worsening respiratory status despite antimicrobial therapy. On HOD3, the patient went into atrial fibrillation with RVR which was converted to sinus rhythm with metoprolol 5mg IV x3. On HOD5, nephrology consult recommended starting steroid therapy, plasmapheresis and obtaining a renal biopsy, however the biopsy was delayed due to worsening respiratory status.

# Acute respiratory failure: Unlikely simple CA-PNA given worsening status while on appropriate antibiotic therapy. Active tuberculosis possible given history of chronic productive cough with hemoptysis, constitutional symptoms and imaging findings. IGRA’s of limited utility in diagnosis of active disease, further, while three negative sputum AFB smears decreases the likelihood of TB, additional testing with NAAT and culture is required. Another possibility is a vasculitic process given concomitant hematuria and acute renal failure, with respiratory symptoms now 2/2 alveolar hemorrhage. This was evaluated with ANCA assay which was positive for p-ANCA with high titer. This is often suggestive of primary vasculitis (in this case likely microscopic polyangiitis vs. Churg-Strauss), however ELISA for target antigen is of particular importance as p-ANCA with specificity for antigens other than MPO can be associated with another condition on the differential: Goodpasture’s syndrome. This patient was found to have elevated anti-GBM antibodies which are highly suggestive of Goodpasture’s syndrome, and can be associated with ANCA-positivity (often suggesting a poorer prognosis with decreased likelihood of recovery of renal function).1

# Acute kidney injury: The patient had significant elevation of serum creatinine compared to last-recorded baseline. She also described darkening and foamy appearance of urine 3 weeks prior to admission, suggestive of proteinuria/hematuria of relatively acute onset. This was supported by urinalysis findings of protein and RBC’s (with casts). Given presence of anti-GBM antibodies, high specificity of such findings, and correlation with glomerulonephritis with evidence of pulmonary alveolar hemorrhage, this appears to be the most likely cause at this time. Definitive diagnosis with renal biopsy to be obtained following stabilization of respiratory status. Patient will be started on plasmapheresis and immunosuppressive therapy (corticosteroids, cyclophosphamide).

A System for the Diagnosis of Tuberculosis: 4, 5

A System for Vasculitides: 8, 9