A 45 year-old female with a history of ureterolithiasis s/p bilateral percutaneous nephrostomies, hypertension and diabetes presents to the emergency department with flank pain and dysuria for two days. She noted that output from her right nephrostomy had diminished. On evaluation, her vital signs are notable for fever and tachycardia but are otherwise normal. Examination demonstrates right costovertebral angle tenderness to percussion. Drain sites appeared normal, without overlying erythema. Urinalyses from both nephrostomy collection bags were submitted. Computed tomography of the abdomen and pelvis was obtained to evaluate for nephrostomy malposition. 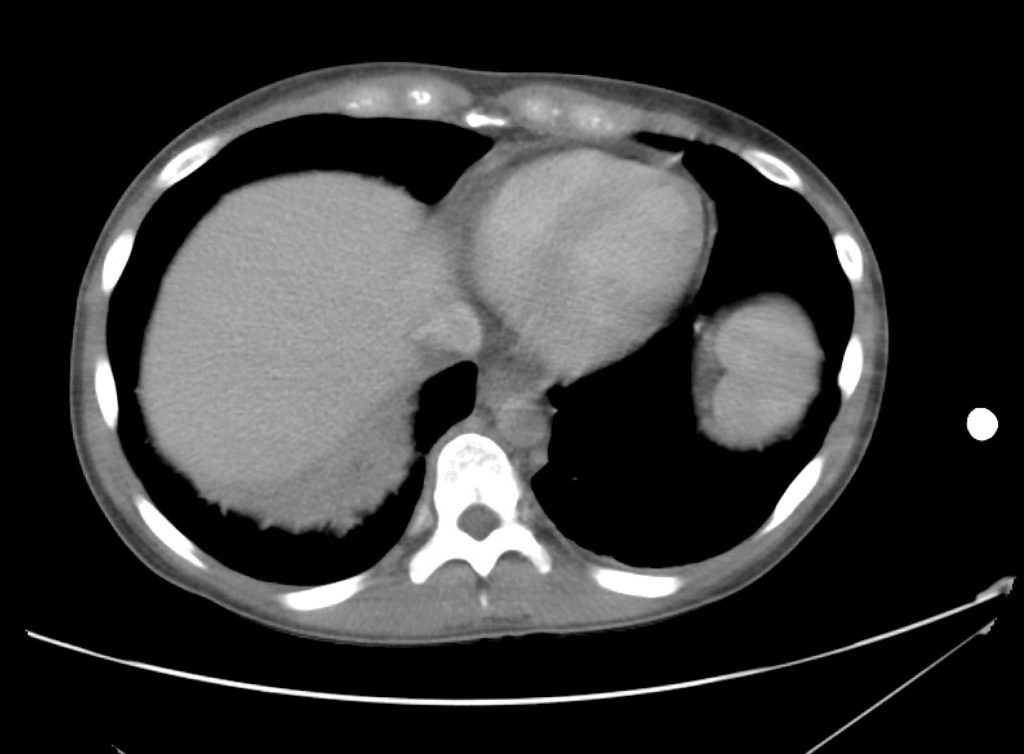 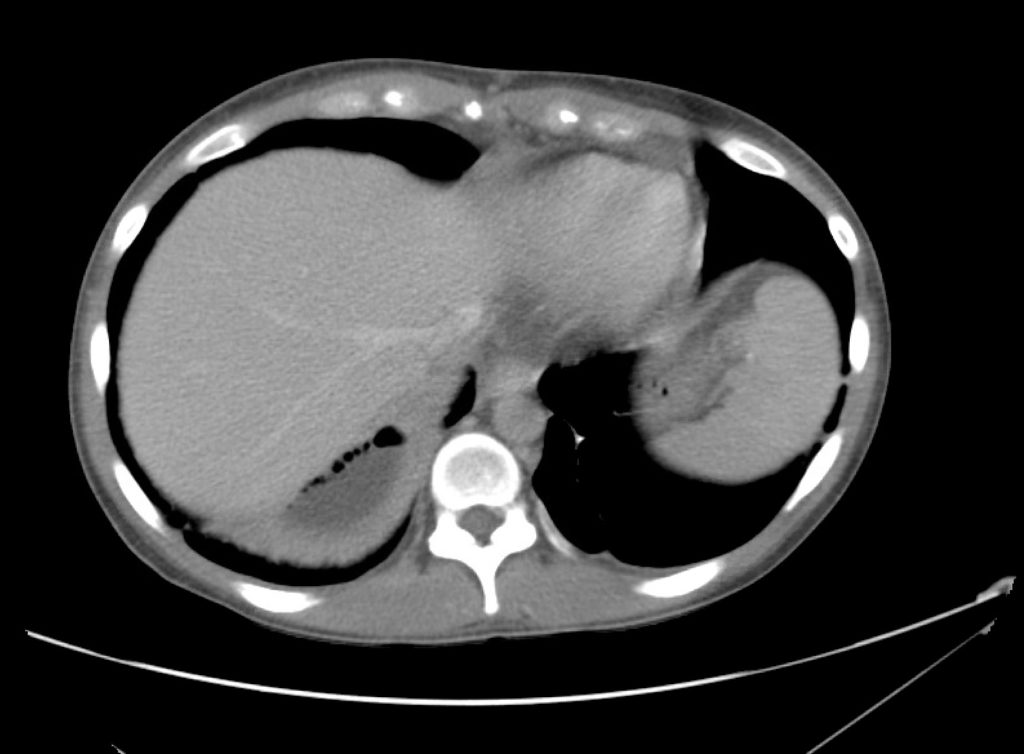 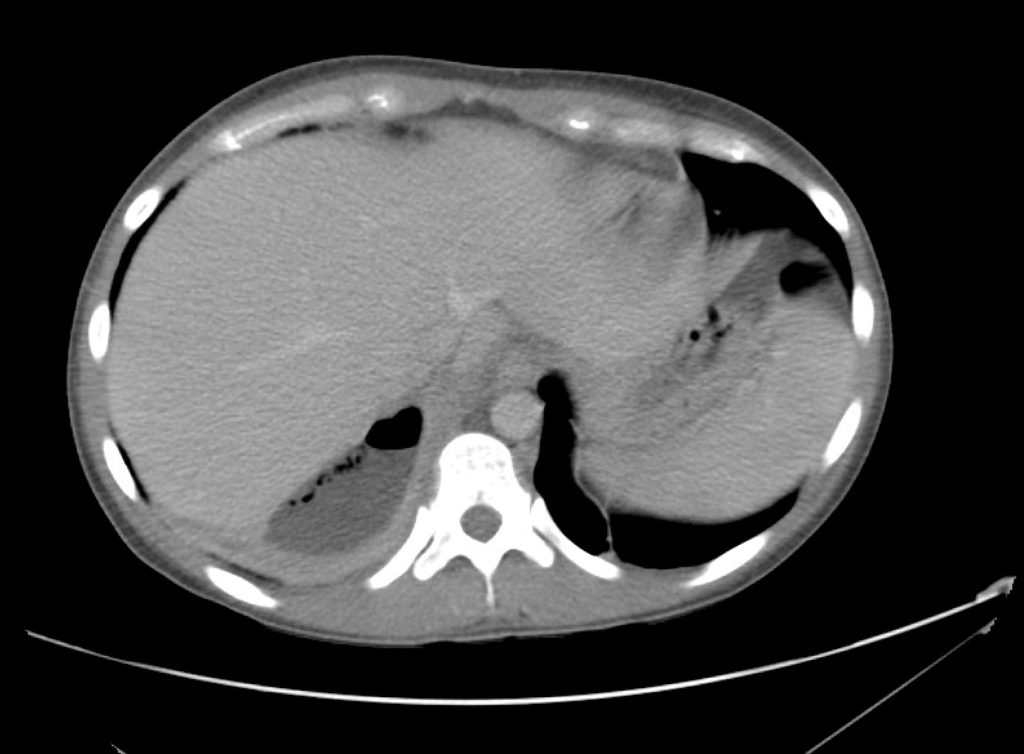 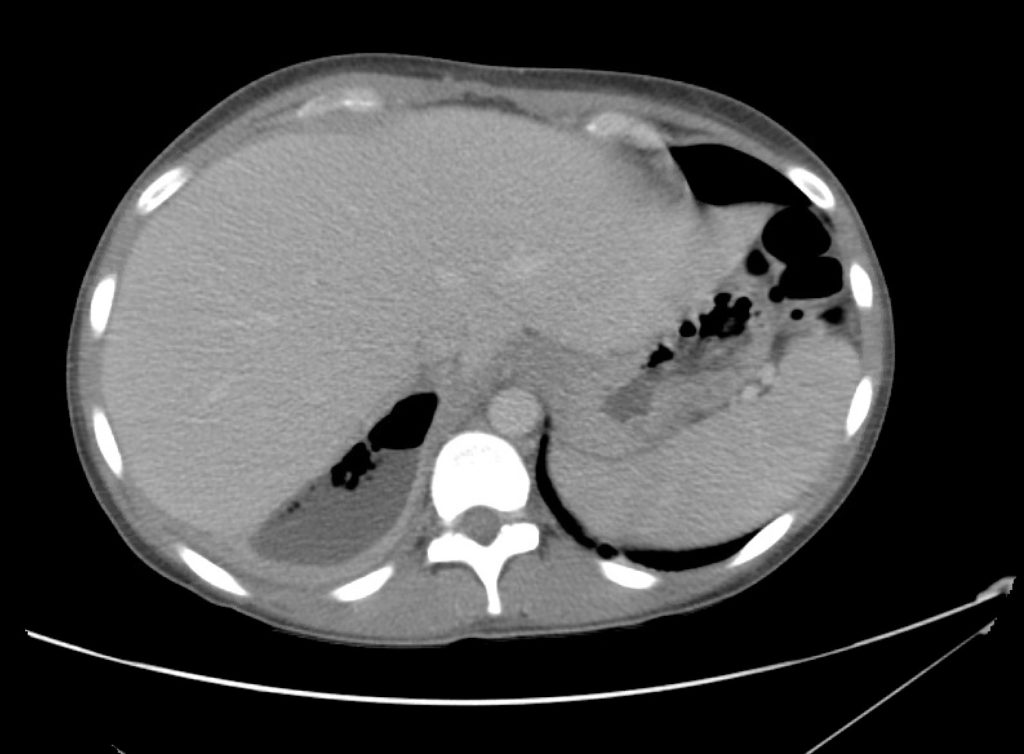 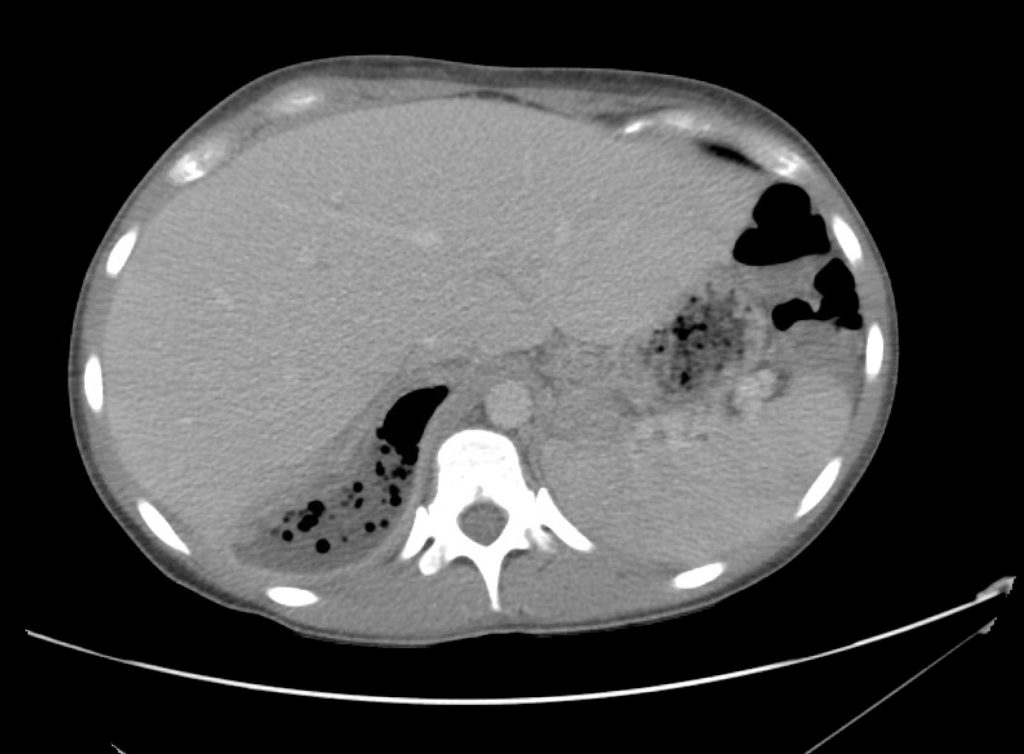 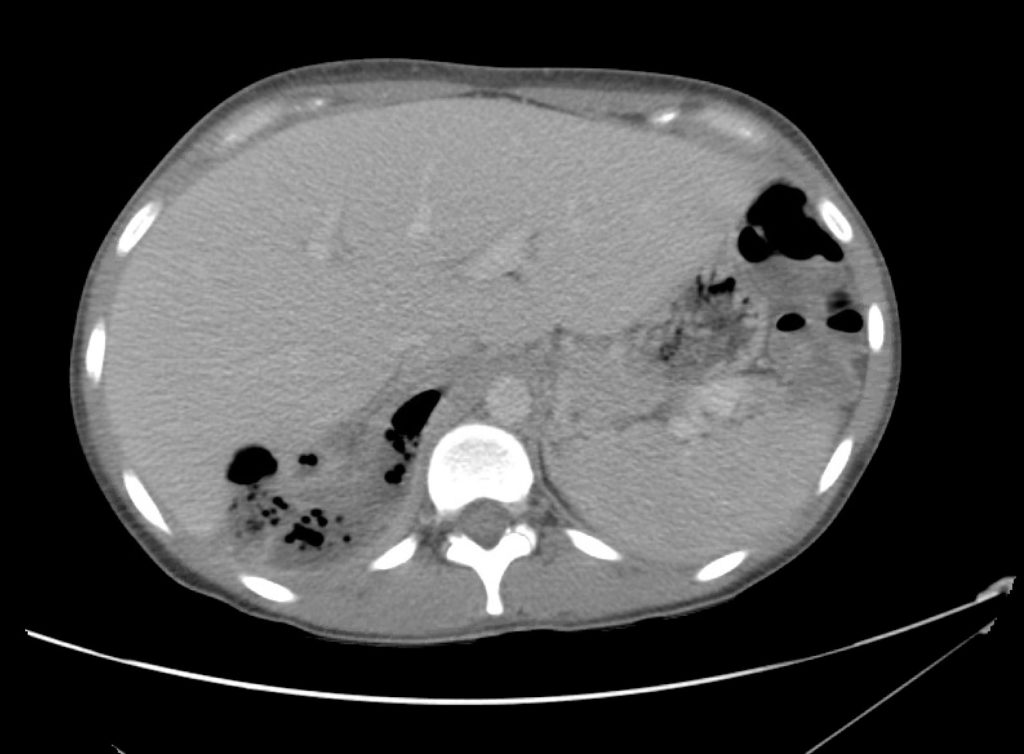 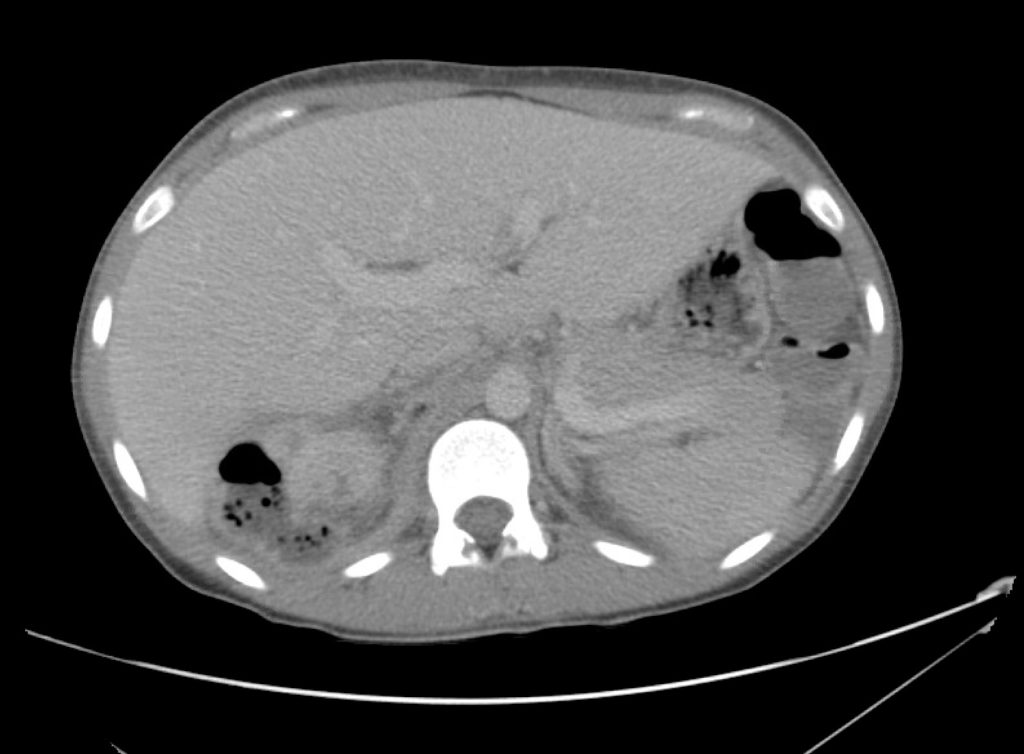 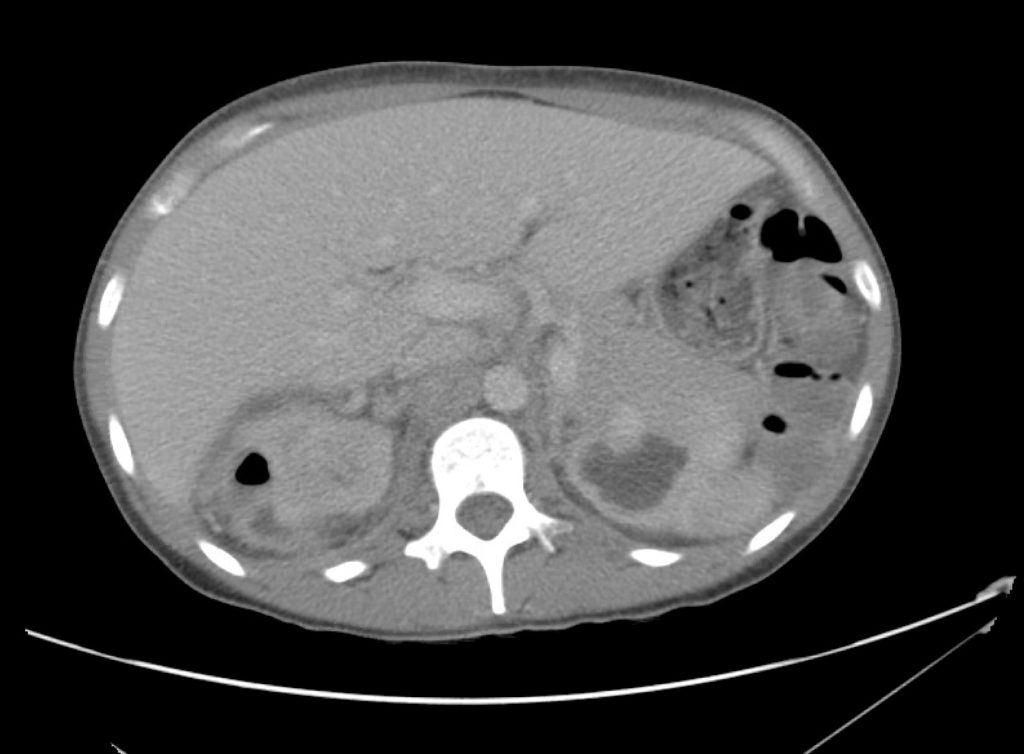 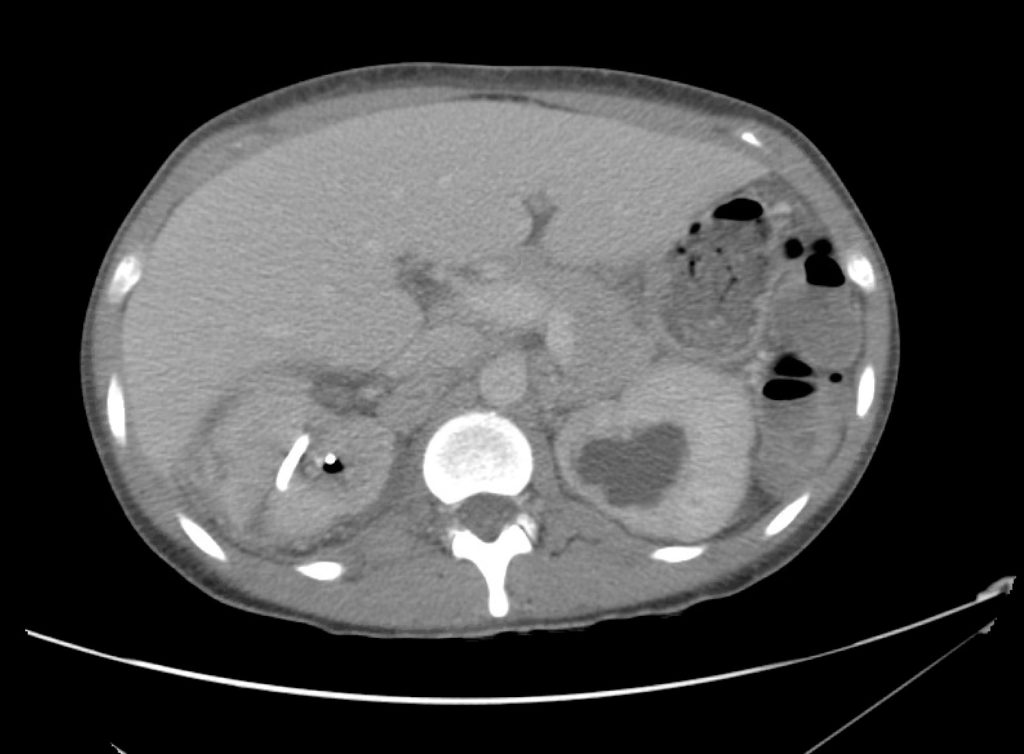 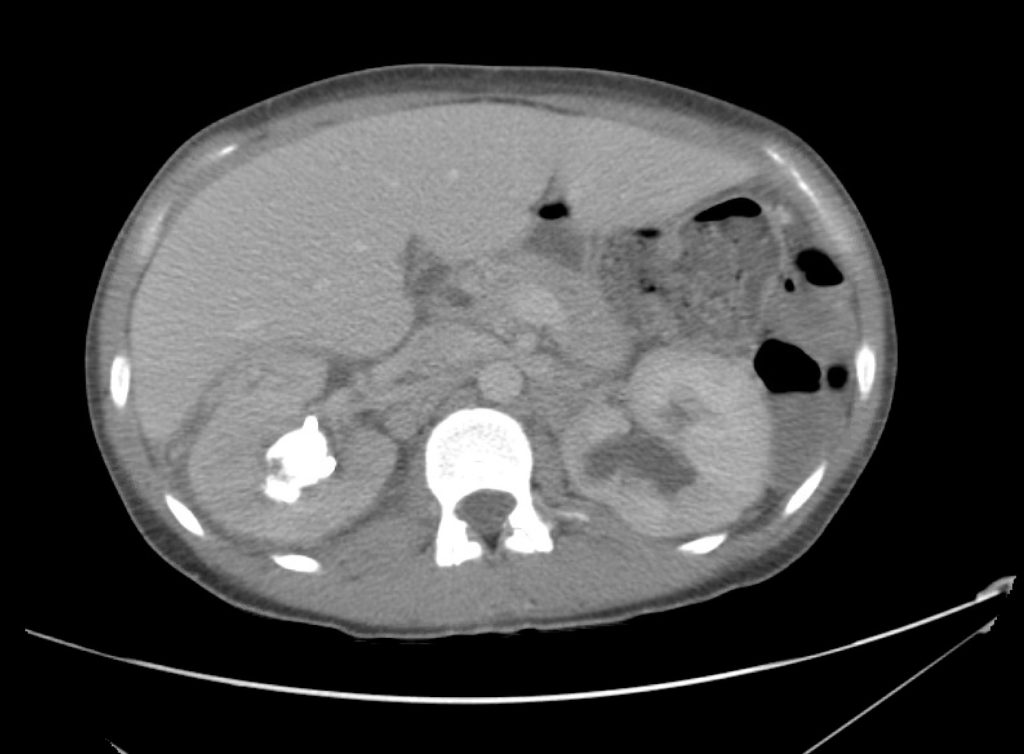 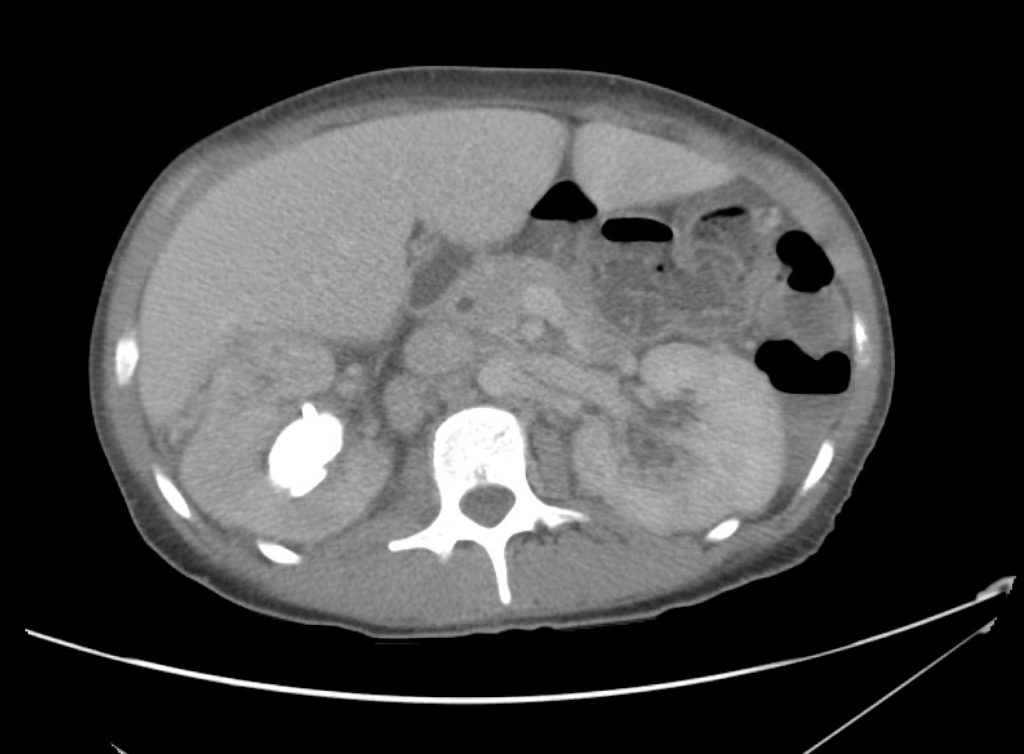 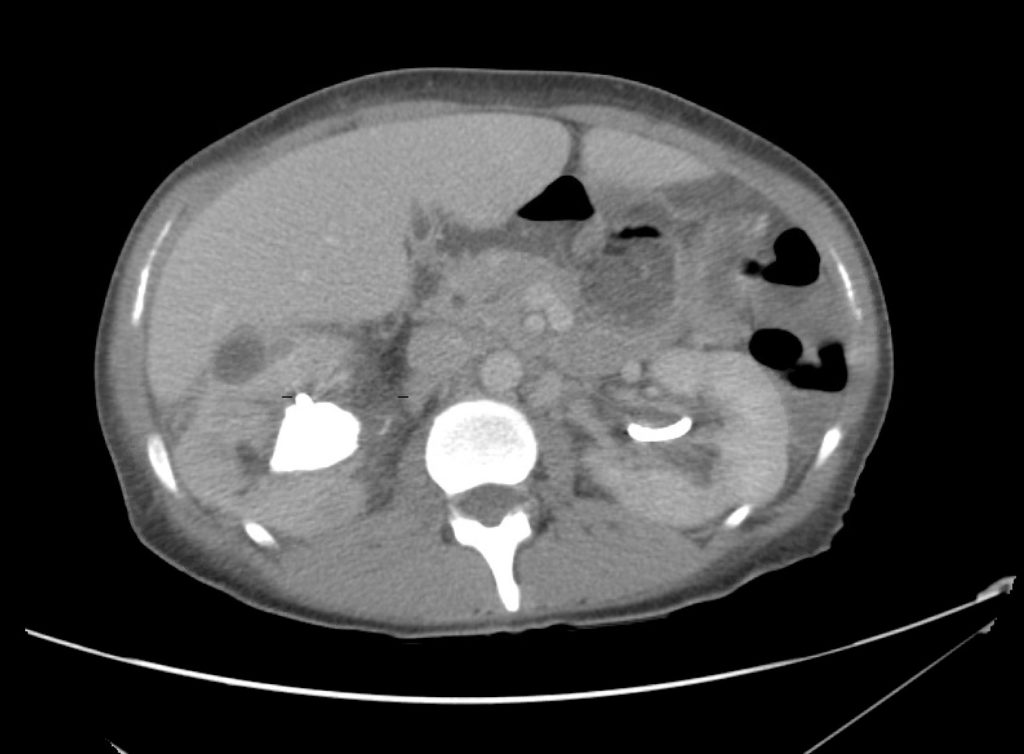 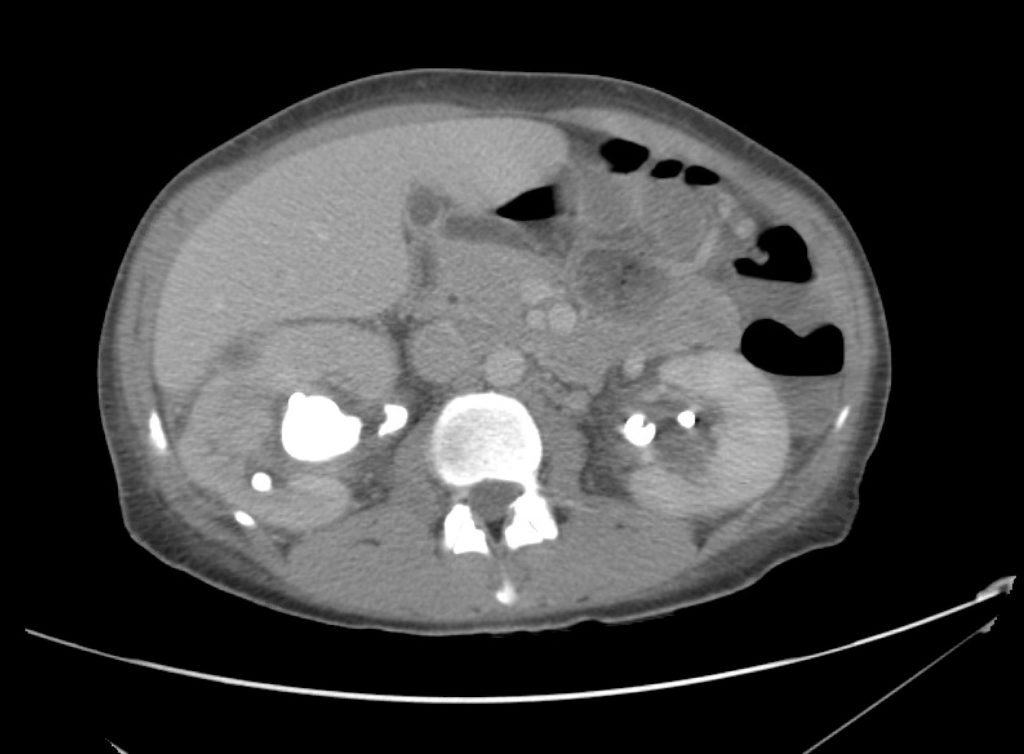 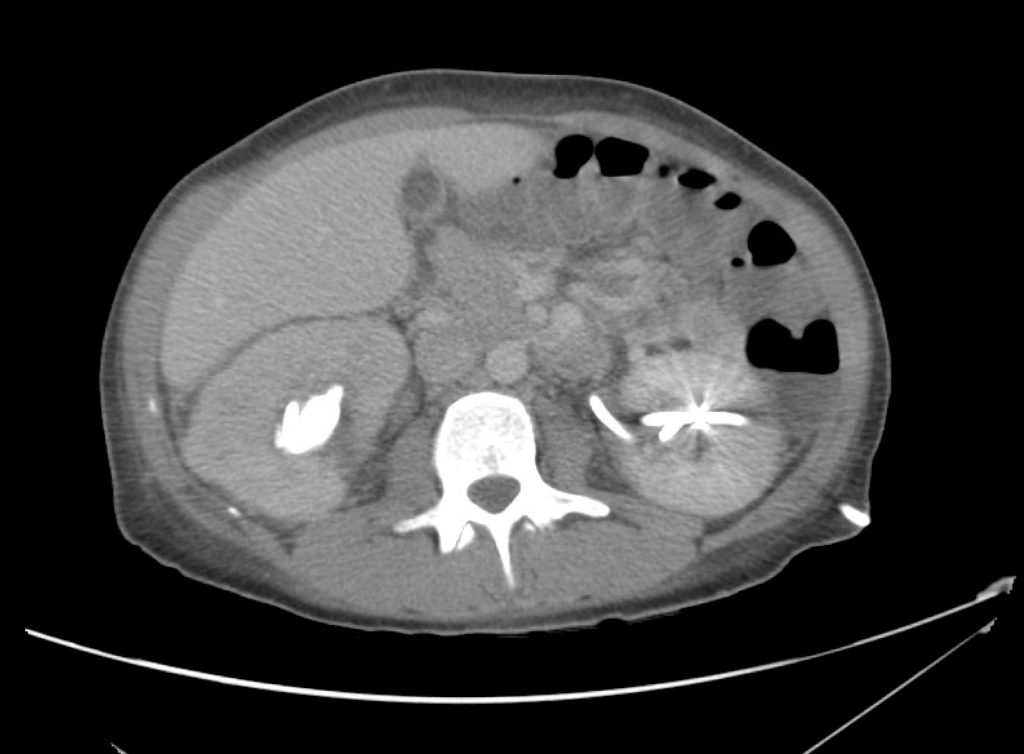 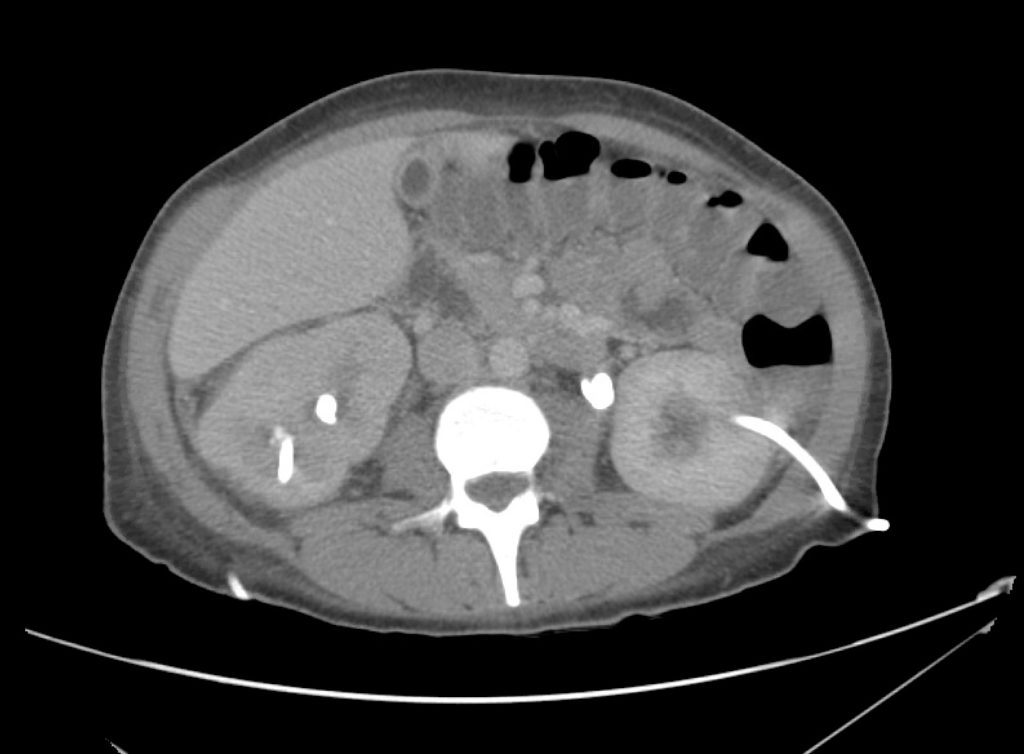 The patient was treated with parenteral antibiotics based on prior culture data and was admitted to the intensive care unit with urology consultation and plan for interventional radiology percutaneous drainage. The patient underwent uncomplicated perinephric drain placement and nephrostomy exchange and was discharged on hospital day five to complete a course of oral antibiotics.

An 8-month old female, fully-immunized, otherwise healthy is brought in by paramedics after 1 minute of witnessed generalized tonic-clonic shaking. The patient had otherwise been well, eating and behaving normally earlier that day. On EMS arrival, the patient was post-ictal but grew increasingly responsive en-route and upon presentation to the pediatric emergency department she was crying and appeared normal to her parents. Capillary glucose was 118g/dL. On examination the patient was noted to be febrile with a rectal temperature of 39.4°C. The remainder of the physical examination was normal.

The patient received anti-pyretics and a urinalysis was obtained which was not suggestive of urinary tract infection. During the 3-hour period of observation in the emergency department the patient remained at her normal baseline, had no further seizure activity, and tolerated oral intake with difficulty. The patient was suspected to have a simple febrile seizure and was discharged home.

Algorithm for the Diagnosis of Febrile Seizure

A young male with unknown medical history is brought in by ambulance with altered mental status. EMS reports that the patient was agitated, requiring restraints for transportation. On arrival, the patient is agitated, uncooperative and unable to provide history. Vital signs are notable for tachycardia, tachypnea and hypertension. Physical examination demonstrates diaphoresis and mydriasis, as well as increased muscle tone – particularly in the lower extremities with ankle clonus. A core temperature is obtained and noted to be elevated at 41.5°C. Point-of-care glucose is normal.

Rapid external cooling measures were instituted and several doses of intravenous benzodiazepines were administered with improvement in agitation. Laboratory studies were notable for a modest leukocytosis (WBC 18.4 without immature forms), serum sodium was 135 without osmolar gap, creatine kinase was slightly elevated without renal dysfunction, and thyroid function tests were normal. Toxicology screen was negative. ECG revealed sinus tachycardia but was otherwise normal and non-contrast computed tomography of the head was normal.

After a brief admission in the intensive care unit, the patient’s mental status improved and he reported MDMA use on the evening of presentation, he also described a history of major depression and was taking paroxetine.

The designation of 38°C as “suspicious” for fever dates to 1868 and the analysis of over one million (axillary) temperature measurements by Carl Wunderlich1. Any cutoff is arbitrary and requires recognition of the clinical context and normal daily variations (with nadir in the morning and peak in evening) 2,3. What is clear is that peripheral thermometry (unless demonstrating fever) is unreliable and a core temperature should be sought4.

Temperature homeostasis is a balance between heat production and dissipation maintained by the anterior hypothalamus. Heat production is a byproduct of normal metabolic processes and skeletal muscle activity. Conservation, maintenance or dissipation of heat is aided by cutaneous vasodilation, sweating, or behavioral responses.

Fever is caused by endogenous or exogenous pyrogens which alter the homeostatic set-point, inducing thermogenesis and elevating the body temperature. Precipitants of fever are usually infectious, however non-infectious processes (ex. malignancy, tissue ischemia/infarction, auto-immune disease) resulting in inflammation can provoke a similar response 5-7.

There is no explicit temperature distinction to diagnose hyperthermia, instead the physiologic mechanism is different. In hyperthermia, the body’s homeostatic mechanisms are dysfunctional or overwhelmed due to heat exposure, excess production, ineffective dissipation or hypothalamic malfunction 8.

Algorithm for the Evaluation of Hyperthermia 8-15

A young female with a history of schizophrenia presents to the emergency department reporting hallucinations. She had been diagnosed with schizophrenia one year previously and was briefly admitted to a psychiatric hospital. She discontinued her anti-psychotic (risperidone) two months ago, and over the past week she reports increasingly prominent auditory and visual hallucinations.

Vital signs are notable for a heart rate of 148bpm and are otherwise normal (including core temperature). Detailed physical examination is normal except for a rapid, regular heart rate. Mental status examination demonstrated normal level of alertness and orientation, linear and cogent responses and occasional response to internal stimuli during which she appeared anxious.

Laboratory studies were reviewed and unremarkable. Normal hemoglobin, normal chemistry panel, negative hCG, and negative toxicology screen. The patient remained persistently tachycardic with a heart rate ranging from 140-160bpm (again sinus tachycardia on 12-lead ECG). An atypical antipsychotic and anxiolytic were administered and additional studies were obtained. Serum TSH, troponin and D-dimer were normal and bedside ultrasound did not identify a pericardial effusion. The patient remained asymptomatic, reporting subjective improvement in anxiety and hallucinations. Psychiatry was consulted and the patient was placed in observation for monitoring of sinus tachycardia. Observation course was uneventful as the patient remained asymptomatic. Transthoracic echocardiography was normal. Psychiatry consultation recommended resumption of home anti-psychotic and outpatient follow-up. Tachycardia had improved but not resolved at the time of discharge (heart rate 109bpm) and the patient was instructed to follow-up with her primary care provider.

Algorithm for the Evaluation of Sinus Tachycardia

Any vital sign derangement is concerning and tachycardia may be associated with unanticipated death after discharge home1. The presence of tachycardia suggests one of several categories of hemodynamic, autonomic, or endocrine/metabolic derangement.

Autonomic nervous system disturbances induced by stimulant, sympathomimetic or anti-cholinergic use, or withdrawal of certain agents such as ethanol or beta-blockers may be at fault.

Endocrine and other causes

Hyperthyroidism and pheochromocytoma should be considered, and as diagnoses of exclusion: anxiety, pain, or inappropriate sinus tachycardia2.

Algorithm for the Evaluation of Narrow-Complex Tachycardia3,4,5,6

An 8-month old male is brought to the emergency department with fever. He has had four days of fever (temperature ranging from 37-40°C), rash on trunk and extremities, white-colored tongue discoloration, and irritability with decreased oral intake. Temperature on presentation was 39.4°C, examination revealed an erythematous maculopapular rash on the extremities and trunk including soles of the feet. Mucous membrane involvement was noted with oropharyngeal erythema and bilateral conjunctival injection. Neck examination demonstrated right-sided cervical adenopathy.

The patient was admitted with a diagnosis of Kawasaki Disease and was treated with IVIG and high-dose aspirin. The patient demonstrated marked improvement with treatment and had a normal echocardiogram. He was discharged on hospital day three.

Algorithm for the Evaluation of Kawasaki and Incomplete Kawasaki Disease3,4

Incidence of GABHS by Centor Criteria

48F with a history of SLE presenting with two weeks of fevers and joint pain. The patient reports progressive development of these symptoms associated with malaise and muscle aches. She also reports two days of cough productive of yellow sputum, but denies chest pain, shortness of breath or hemoptysis. She states that these symptoms are comparable to prior lupus flares but have persisted longer than usual. She has not travelled or been hospitalized recently and has no sick contacts.

48F with a history of SLE presenting with fever and polyarticular arthralgia.

#SIRS: Fever and tachycardia in the setting of immunosuppression. The differential diagnosis includes pneumonia (bacterial, viral, less-likely fungal), which would be community-acquired. Association with polyarticular arthralgia suggests symptoms may represent lupus flare given no leukocytosis and elevated CRP.

#Hypocalcemia: Asymptomatic, likely due to hypoalbuminemia and hypomagnesemia. Improved after IV fluids and correction of hypokalemia, hypomagnesemia.

The patient was admitted and completed a 7-day course of ceftriaxone and azithromycin. Rheumatology was consulted for management of lupus flare, which included resuming home medications and a prednisone taper upon discharge.
The patient was admitted ten days later, presenting with fevers, productive cough and pleuritic chest pain. Found to have a left lower lobe sub-segmental pulmonary embolus and antiphospholipid syndrome. She was also treated empirically for healthcare-associated pneumonia with cefepime and vancomycin given fever and productive cough though there were no imaging findings suggestive of consolidation and sputum cultures were negative.

It is important to differentiate whether fever in a patient with SLE is due to disease activity (flare) or active infection. 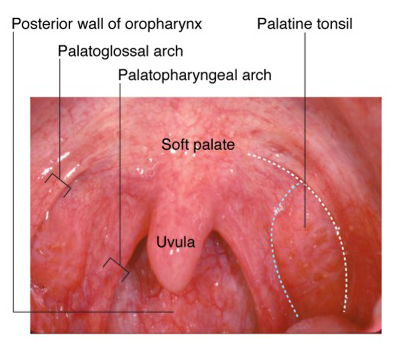 17 year-old female presenting to the pediatric ED with sore throat for 2 days.

The patient reports steadily worsening sore throat over the past 2 days, associated with a sensation of swelling. The pain is described as sharp, 4/10 in severity, located on the left side of her throat, and worsened with swallowing. She denies inability to swallow or difficulty breathing, she also denies fever, cough, new skin rashes or genital lesions.

She has no PMH/PSH, takes no medications, denies t/e/d use and is not currently sexually active.

17yo female with no significant PMH with acute pharyngitis for 2 days. The most likely cause of the patient’s symptoms is viral pharyngitis, potentially herpangina (given the appearance of the tonsillar lesion). A more serious viral/bacterial pharyngitis is less likely given the absence of fever or significant erythema/exudate. There was no uvular deviation to suggest peritonsillar abscess and no evidence of airway obstruction to suggest other acute processes (epiglottitis, retropharyngeal abscess). The plan is to recommend supportive care and ibuprofen for symptomatic relief. The patient will be discharged home in good condition with precautions to return if symptoms worsen or she begins to have difficulty swallowing/breathing. 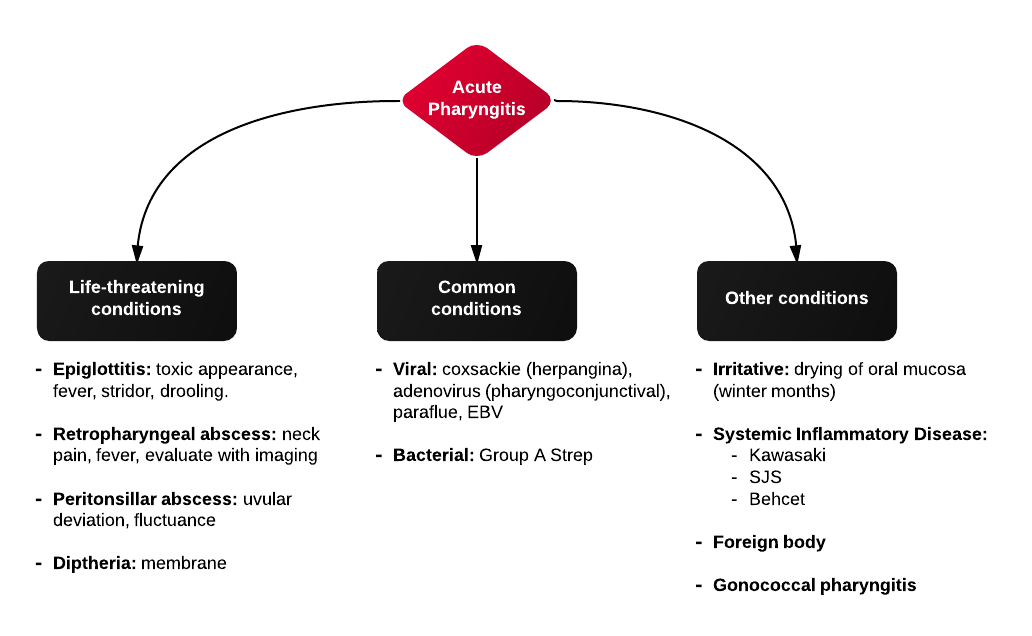 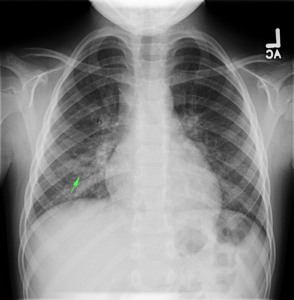 5yo girl brought to the pediatric emergency department by her mother due to 3 days of fever.

The patient’s fever was first noted 3 days ago, measured at home to 103°F. It is associated with a moist cough, vomiting, and decreased PO intake. Her mother reports that she appears lethargic and has been urinating less frequently. The patient denies headache, changes in vision, burning with urination, or ear pain. No known sick contacts, attends day care.

No significant medical/surgical history. Ex-term born NSVD with no complications.

5yo with 3 days persistent high fever and cough. These symptoms along with examination findings of crackles warranted further imaging (CXR) which revealed infiltrate in the right inferior lung field. The patient appeared clinically stable and was tolerating PO intake in the ED and was discharged home with azithromycin 5mg/kg/dose (with loading dose), clinic follow-up and strict return precautions.

Evaluation and Management of Pediatric Fever

A System for Pediatric Fever: 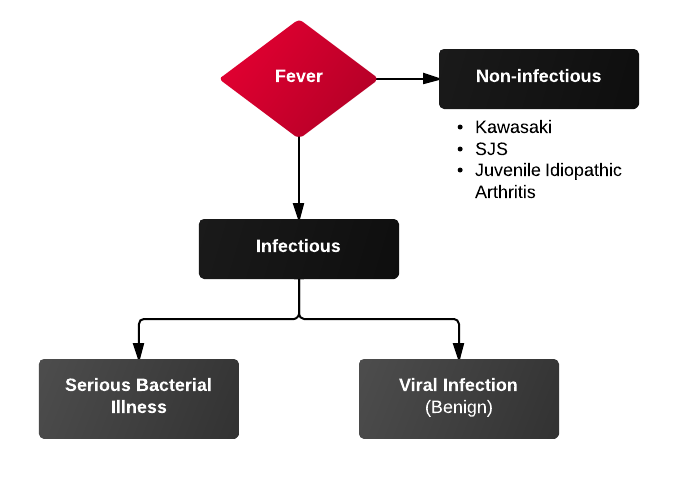