posted in Pediatrics on October 24, 2017 by Editor 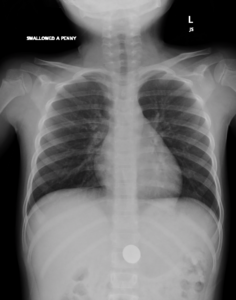 XR Chest: Circular radioopaque foreign body likely in the antrum of the stomach.

A healthy 5 year-old boy is brought to the pediatric emergency department after he informed his parents that he accidentally swallowed a coin just prior to presentation. He has no complaints and on evaluation appears to be breathing comfortably and is tolerating secretions normally. A plain radiograph was obtained and is shown below.

The patient remained well-appearing and was discharged with primary care follow-up. 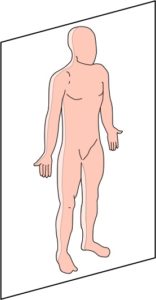 Esophageal foreign bodies typically orient coronally. For example, a coin will appear as a circle on an anteroposterior projection.

Tracheal foreign bodies typically orient sagitally. For example a coin will appear as a line on an anteroposterior projection.

Algorithm for the Evaluation and Management of Pediatric Foreign Body Aspiration